As I indicated in the previous Chinatown post, I did have enough time to tour Wat Traimit, one of the big attractions of Chinatown. According to the link on that post, the Golden Buddha in Traimit is the world’s largest solid gold Buddha image, weighing in at 5.5 tons and standing 15 feet tall (although the image is seated). So, at today’s gold prices, the image is worth quite a few millions of dollars! 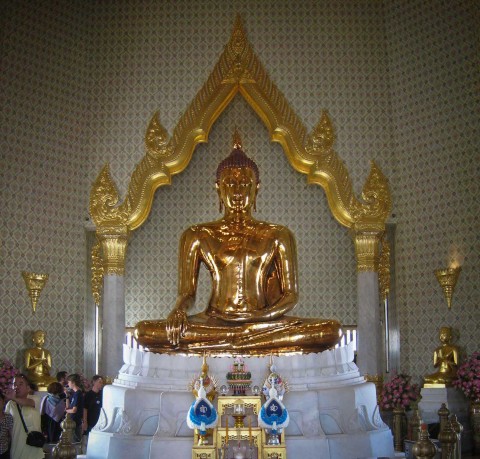 There’s also an interesting history of the 13th century statue, a history involving deception and discovery. Again, check out the link to read about the image.

Here’s another smaller Buddha image that’s near the Golden Buddha.

There’s also a detailed history of Chinatown located in a second-floor exhibition, which shows 3D life-sized scenes of daily living and which also includes a scale model of Chinatown as it looked in the mid 1950s or so. This was the only photo I got of the exhibition, since most museums and similar places don’t allow you to take photos. I didn’t see any signs forbidding it, but I didn’t want to offend anyone. At the final exhibit, the scale model of Chinatown, I saw someone else taking a shot, so I figured it was ok and took the one below. As with all the photos taken this vacation trip, I had only my pocket point-and-shoot with me. It’s a good camera, but it doesn’t do too well in dark lighting, so I had to crank up the ISO to capture this shot. In post-processing, I removed most of the digital noise that’s usually present with high ISO settings, but in doing so, the image lost some of its sharpness, as you can see in the photo below. I’ll have to bring along my small tripod next time.

And, of course, here are a few shots of the exterior of the wat. As you can see, Thailand’s revered King Bhumibol Adulyadej is honored everywhere.

This one is looking up to the spire from a position close to one of the outside walls.

Directly next door to Wat Traimit is a smaller temple, sort of an annex. Here’s a detail shot of the roof of that area.

Also next to Traimit is a boys’ school (well, I didn’t see any girls, so I assume it’s a boys’ school). At the entrance to the school is a statue of a scholar (again, I assume) from days gone by. Here are the kids during what appears to be recess.

Finally, I did have some time to go to the Siam Paragon shopping mall to buy some reading material. They usually have some kind of display outside the center, and this year’s set-up featured an Alice in Wonderland motif. (Pretty girls not included) Quite colorful.

OK, that’s about it for the Bangkok portion of the trip. It feels like I’ve kind of over-saturated the blog with too many photos of the trip already, so I’ll just post a few more from Nong Khai and Laos a bit later. In the meantime, I’ll process the new Expo 2012 photos I took this past Saturday and get those up soon. More later.