Bolaven has come and gone, but wayward Tembin, now a tropical storm, is on its way, predicted to dump some heavy rain on Korea tomorrow. It won’t have quite the wind speed of Bolaven, as here in Yeosu the forecast is calling for about 30 mile-per-hour winds and rainfall of more than 3 inches.

Bolaven didn’t dump that much rain on us; we got just a bit over an inch in Yeosu, according to the KMA. The winds weren’t terribly destructive, but I’m guesstimating that the peak gusts were around 60 mph. I have a good idea about that guess, because, after the rain quit, I took the bus down to the Expo area yesterday morning, down by the harbor, where fierce winds were howling through the area around the Expo. I had to keep my eye out for any debris that might have been heading my way, but I didn’t have any serious trouble. The wind was strong enough to keep me off balance, and quite a few of the trees that were planted for the Expo had been blown over. Signs in the area had been knocked down, trash cans upended and various bits of mayhem caused by the wind could be seen.

Here are a few shots from campus and from the Expo area. First, here’s a short video of what it looked like from outside my dormitory apartment around 9 a.m.

Most of the trees knocked over at the Expo were planted not too long ago and they hadn’t had enough time to put down deep roots. However, here’s an older tree at the university campus that was blown over. 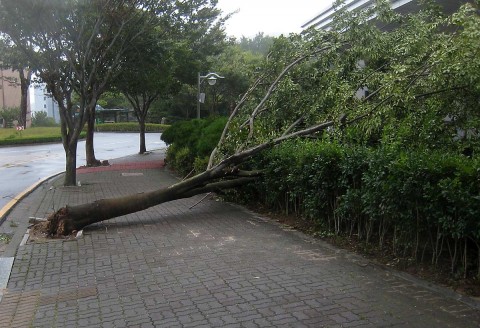 Tree Down at University

Down by the Expo Main Gate was this unfortunate tree.

Quite a few of the trees by the MVL Hotel, right at the harbor’s edge, were uprooted, including this one near the hotel. 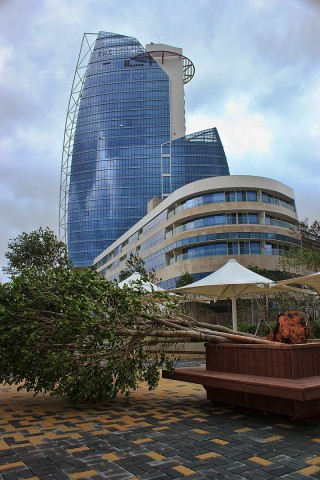 There was other damage in the area, including this restaurant sign that was half-way taken down by the wind. 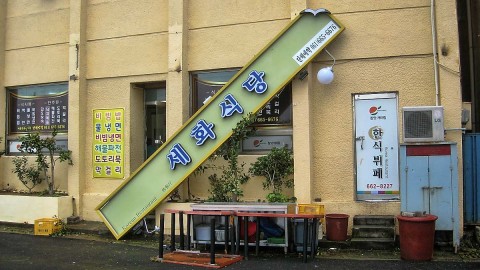 From the MVL Hotel, I noticed that the spray of the surf was washing over the causeway that leads to Odong Island. I walked over to the road in front of the MVL, but the street had been closed off by police, and I was politely told to vacate the area. Hmmmm, I wasn’t going to go out on the causeway; I just wanted to see if I could get some good shots. Well, there’s more than one way to skin a cat. I decided to walk through one of the new tunnels that take traffic from the Expo area to the other side of Jasan Park. From there, I was able to hike up to Jasan and part way down the other side to the pagoda that overlooks the causeway and the island. I shot this video from up there. Here’s a shot of usually-placid Odongdo. 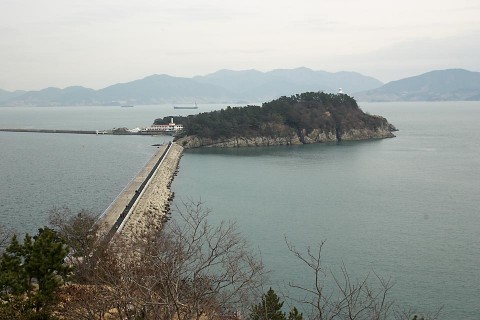 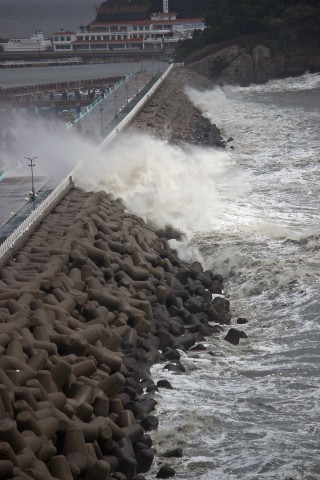 No way could anyone have walked to Odongdo that day; you would’ve probably been swept into the harbor. I’ve got a few more photos and another video of the island that I may put up later, but I’ll update you on what happens with Tembin in my next post.