July and August are the rainy season months in Korea, but in Yeosu, we’ve had very little rain since the beginning of July. Some of my students told me that Yeosu is in a drought, although other parts of Korea have had ample rainfall. The last two days, however, have seen an end to the dry situation. According to the KMA, we’ve gotten about 4 1/2 inches of rain since Friday. The rain has stopped and today has seen a little sunshine now and then, but it appears the drought has been broken.

The weather is looking nice for this coming week and that’s good, since we’re off until the fall semester begins on Sept. 2nd. I hope to do some hiking in the mountains, take the bicycle out for a spin or two and visit the Expo grounds to see if any changes have been made since I last visited in the first part of July.

I’d like to write a longer post, but I have to go to a ring-exchange ceremony between one of our teachers and his Korean wife. I’ve been invited to do the photography for the event and for the reception at one of the local buffet restaurants afterwards. Wish me luck with the photos!

Yeah, it’s been quite hot for a while in East Asia, including in Korea. Not helping matters any is the closure of some of the country’s nuclear power plants. I believe a few were shut down for routine maintenance, but some have been closed because of corruption. In total, it appears that about one-quarter (6) of the plants have been closed. There’s an article about the heat wave here and one about the scandal here.

I’m doing my part by not using my air conditioner all that much, usually for only an hour or two if I’m not at work. The dormitory management gives us 250 Kwh free each month, but if I crank up the air con, I usually use much more than that. Not so, this summer. We only pay 80 won per Kwh over that, but it adds up. So, I’m cutting my usage. I have a good fan that fills in admirably.

Needless to say, with the usual high humidity in Yeosu (80-98%), I haven’t been out and about all that much, so I haven’t taken any new photos recently. Just working, reading and playing computer games.

Here are a couple of “heat wave” tunes. Martha and the Vandellas are singing about a different kind of heat wave here, but the Lovin’ Spoonful are right on track. (Check out the cool styles!)

We had an old-fashioned, rip-roarin’ thunderstorm claw its way through Yeosu earlier today, a nice respite from the bland, misty weather of late. It brought some brief, but heavy rain and cooled things down a bit, though it did nothing to relieve the miserable, high humidity. This is probably the worst time of year to be in Yeosu, July and most of August.

The storm brought back memories of Bangkok and some of the heavy rains that occasionally hit the city. In my previous post, Nai and I left Nongkhai, headed for the City of Angels. We checked into the same hotel, Silom City, that I had stayed at during the first part of my vacation. I had booked a room for 3 nights, unsure if we wanted to stay in the same area for the remainder of our time in Bangkok. The room we had was similar to the one I had earlier, with the same view out the window.

We decided not to change hotels, so I asked the front desk if we could book the room for another 4 nights. They said the basic rooms were full, but they could move us into a deluxe room for about the same price, if I’d want to forego breakfast. Sure, I thought, why not. Well, the 8th-floor view from the new room was incredible. We had a small balcony with a floor-to-ceiling view of the Silom area skyline, one of the best views of Bangkok I’ve ever had. I stayed at the Baiyoke Sky Hotel way back in 2004, in a room on the 65th floor or so. That, of course, had a fantastic view, but this one ran a close second. Here are a few shots. 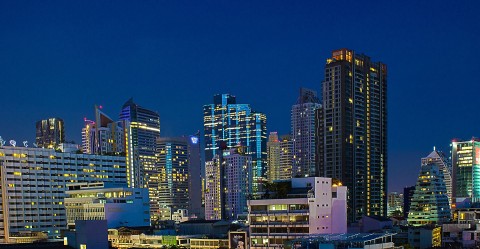 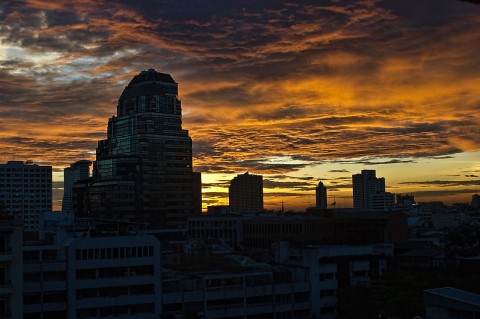 Several of the tallest skyscrapers in Bangkok are in this area. Here are a couple of (not very successful) panoramic shots.

Anyway, I certainly recommend the Silom City Hotel, especially if you can get a deluxe corner room.

That about wraps up my posts from my recent vacation. Stay tuned for some other stuff later, though I’m not sure what!