Wow, we had a heckuva storm out my way yesterday afternoon. It started rolling in about 4 p.m, and I was thinking it would be nice to have a breeze and maybe a bit of rain. The clouds looked pretty benign, but the full force of the storm hit around 4:30 and it was anything but “nice.” I swear we had a mini-tornado. The winds were coming from all directions and they were extremely strong. The roof of my house was being lifted a few inches and dropped back down, more than once. The neighbors’ trees, large and strong, were being bent to about a 60 degree angle, debris was flying through the air, and the rain, only about 15 minutes worth, was fierce!

After it was over, about 30 minutes later, I took a walk around. Our house was OK, but the neighbor in front of us had part of his roof blown off, much of the roof of the karaoke across the road was destroyed, and a small pavilion in the rice field behind our house was torn up. Their was sheet metal all over the yard, and I don’t know where it came from. Plus, the power was knocked out for about 3 hours. This was a bad one, and had me a bit scared. Below is a photo of the pavilion and of the neighbor doing repairs to his roof. We’re supposed to get more storms again this afternoon. I certainly hope they’ll be nothing like yesterday’s. 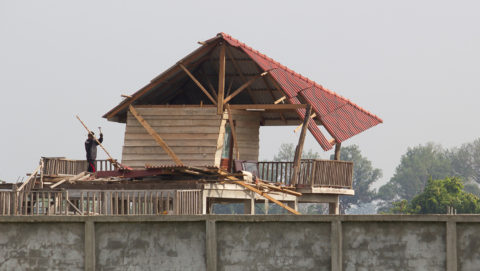 The pavilion behind my house after the storm yesterday. 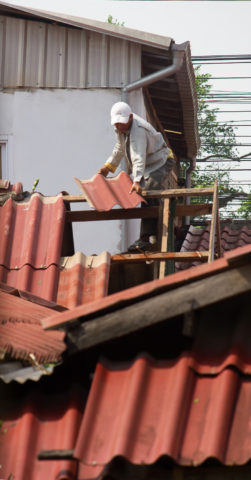 My neighbor repairing part of his roof.