For Wat It’s Worth

Here are a few more photos of my recent trip to Laos. These are shots taken of a couple of wats–Buddhist temples. I did an early morning walkaround one day while we stayed in Vientiane. Nai was still asleep, and I forgot to ask him later the name of the wat pictured below. I think it’s Wat Sithan Neua. It’s a few blocks up from Fa Ngum Road, downstream of the Inter City Hotel. Anyway, it was a beautiful, clear morning, quite pleasant for just strolling aimlessly. Here’s a shot from outside the temple grounds. 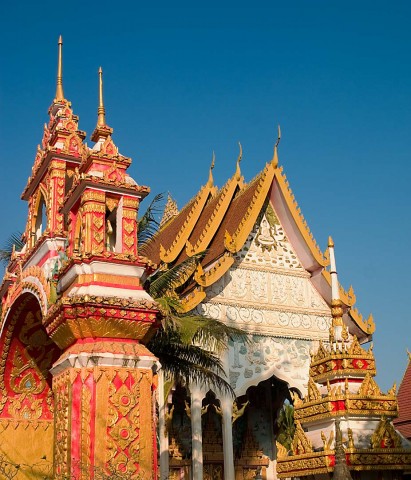 Here’s some detail of the wall of the main entrance. I’m fascinated by the murals in Buddhist temples, both here in Korea and in Laos and Thailand. This one appears to show some highlights from the Buddha’s life. 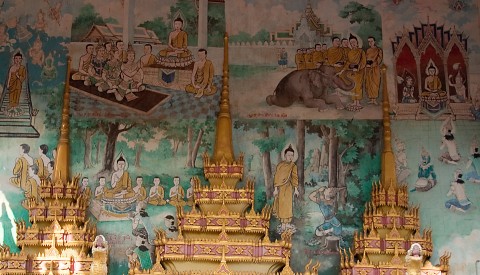 This is one of the entrances into the temple grounds. 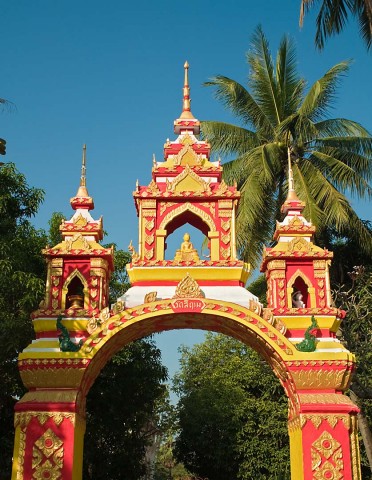 Later that same day, we went to Wat Si Muang to ask for blessings from one of the monks. On the temple grounds are a few vendors who sell incense, candles, flowers and wooden cages of small birds (sparrows?) which will be released later. One of the vendors sells long lengths of candles that are used to measure the length from your outstretched arm to your chest and the length around your head. The thin, flexible candles are folded at these lengths. Later, when the monk gives the blessing, he burns these candles. Nai, I and another unknown Lao fellow were blessed by a young monk. As we sat on the floor in front of him, the monk took a spool of string and wrapped it around the three of us and chanted for about five minutes, asking for Buddha’s blessing. Afterwards, Nai burned the incense and laid the flowers at an outdoor altar, where he also released the birds, about 6 of them in all. I’m sure they were happy to get out of the cramped cage and regain their freedom. I wonder how many of them are caught again. All in all, it’s a very peaceful, spiritual ceremony.

Inside the main temple, in an alcove beyond where we received the monk’s blessing, there is this jade (emerald?) buddha. It’s another area where people pray and offer incense and flowers. There were no worshippers in here at the time, so I took the opportunity to snap this shot.

That’ll do it for my Laos photos. The cold weather in this neck of the woods is supposed to lessen next week, so hopefully I’ll get off my lazy, but warm, duff and get some shots of Yeosu. More later.